Walk the windswept crest of the Alpilles with awe-inspiring vistas

The vineyards and olive groves glistening in the soft Provençal sunshine

Admire the impressive Roman remains in the great city of Arles

Walk in the footsteps of Van Gogh on this short walking holiday in Provence. Beginning in the artsy town of Saint-Rémy, nestled in the foothills of Les Alpilles Mountains, you will continue to the medieval village of Les Baux, spectacularly set atop a rocky crag. Your trip finishes in the city or Arles, known as the “Rome of Provence”.

This part of Provence is an artist’s dream, with its clear blue skies set against deep green fields, silvery olive trees, golden sunflowers and the white, jagged peaks of the Alpilles that soar high above the Rhône Valley. Van Gogh arrived here in the late 19th century, and this beautiful region inspired some of his greatest work. As you follow in his footsteps, you will discover a countryside dotted with thick-walled Provençal farmhouses, medieval villages and lone cypress trees.

Visit the Romanesque monastery that Van Gogh called home, while following former Roman roads and fragrant trails carpeted with rosemary, thyme and cistus flowers. Follow scenic paths from the charming town of Maussane (famous for its olive oil) to the dramatic medieval hilltop village of Les Baux de Provence. Continue to the impressive city of Arles, with its wealth of Roman ruins and a UNESCO World Heritage Site. Spend time exploring the Roman Coliseum and Theatre, being sure to stop for a glass of the excellent local wine at one of many outdoor cafés.

An easy walking getaway, ideal for families, under the beautiful blue skies of Provence.

Your walking adventure begins in Saint Rémy de Provence, nestled against the foot of the Alpilles mountains. Saint Rémy is easily accessible by bus from Avignon (30 mins), itself connected to the TGV trains from Paris, Marseille and Nice.

Saint Rémy has always attracted painters; its blue Provençal skies highlight the greens of the fields, the silvery leaves of its olive trees, its golden sunflowers and the white jagged peaks of the Alpilles. It’s an artists dream! So much so, in fact, that Vincent Van Gogh spent the last years of his life here, completing some of his most renowned works, including his Starry Night.  Spend the eveing strolling through the labyrinth of streets and enjoy dinner in one of the many excellent restaurants.

You begin by following the Van Gogh path from the town centre towards the Alpilles, retracing the very steps the artist took more than a century ago. Enamel reproductions of his works face the very landscapes that inspired his brush strokes: the lone cypress trees and farmhouses, with the serrated peaks of the Alpilles as a backdrop. You can visit the Romanesque monastery that Van Gogh called home, converted into an asylum well before his arrival in Saint Rémy. You then follow a shady forest path, winding slowly up to the crest of the hills. Though peaking at a modest 400m, the Alpilles are situated in an otherwise flat Rhône valley, offering jaw-dropping views of the surrounding windswept plains, Mont Ventoux to the north and even the Mediterranean Sea to the south on a clear day. Return to Saint Rémy through olive groves and along a former Roman road.

Today’s walk takes you back up to the crest of the Alpilles, following a forest trail that snakes its way along the ridge. Your route is lined with veritable carpets of rosemary, thyme and cistus flowers, their aromas intensified by the brilliant Provençal sun. You will enjoy open views of the mountains to the north and the flatlands to the south. You then descend a winding track and reach the village of Maussane through the olive groves. This lively little town is filled with cafés and restaurants and produces some of the best olive oils on the planet!

You stroll through the golf course and then via a hidden path you climb up to the Medieval village of Les Baux de Provence, with its majestic stone buildings perched high atop a rocky crag and crowned by the ruins of its medieval castle. Listed among the “most beautiful villages in France”, Les Baux’s stone architecture and narrow cobbled streets have withstood the centuries. Take a walk up to the castle ruins and imagine what life would have been like a thousand years ago!

Exiting the village from its medieval gate you descend back into the plains, and via canals and olive groves you return to Maussane. A short transfer then takes you to the Roman town of Arles. This is a town that offers the best of the old and the new; its Roman coliseum (one of the largest in the whole Roman Empire) and other impressive ruins juxtaposed with a vibrant nightlife in the town squares and bistros, inviting leisurely strolling as you enjoy your last night in Provence!

Your tour ends in Arles after breakfast. You can take a bus to Avignon for onward travel or to Marseille airport. Au revoir…!

Getting to Saint Rémy 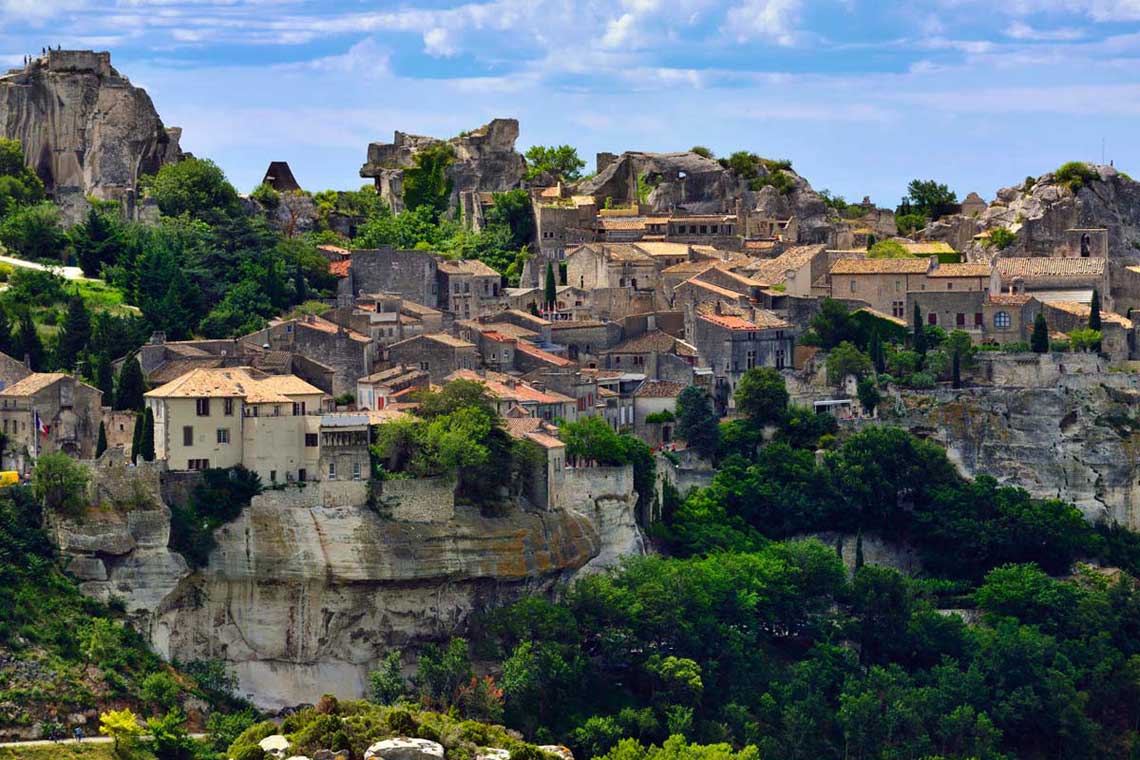