Walk the ancient coast- to-coast trail from Palermo to Agrigento

Stay in villages full of history, such as Sutera, with its Arabic maze of alleys

Experience the enthusiasm, hospitality and pride of the Sicilian people

Hiking the Magna Via Francigena

The Magna Via Francigena is not a trip or a holiday, it’s a “journey” of discovery that, like a budding wild flower, slowly opens up to reveal a vibrant, colourful and scented heart. Leave behind the bustling art-filled cities and archaeological sites that line the coasts of Sicily and step by step, village by village, traverse one of Italy’s last frontiers.

As the main overland connection between the north and the south coast, the ancient road between Agrigento and Palermo was a historically important trade route in Sicily which facilitated movement of people, animals and goods across the island. The Magna Via connected the two major harbours of the past: Agrigento and Palermo, via a system of Trazzere (old gravel roads) that linked every village of the backcountry. Over time, the route was shaped by the successive invading forces of Greeks, Arabs and Normans, and was used for millenia by pilgrims and travellers alike.

To walk the pilgrim route today means to explore authentic Sicily at a slower pace, as people did in the past centuries, and discover the very heart of the island with its hidden gems: archaeological and natural sites as well as masterpieces of art set amidst the rugged beauty of inland Sicily. Step out of your comfort zone and welcome the casual, unexpected and unorthodox and get to know the genuine character of this enchanting, controversial island.

After settling into your city centre hotel, find an outdoor table to sit with a cappuccino or granita and take in the sights and sounds of this cultural melting pot. The Baroque art, Byzantine architecture and medieval buildings and monuments you see around you are the result of centuries of invasions by Arabs, Greeks and Normans. Take a stroll through the markets of Capo, Vucciria and Ballarò, which are reminiscent of Arab souks. In the evening, why not visit the famous Teatro Massimo – the largest opera house in Italy and one of the biggest in Europe.

Your first walking day begins with a short transfer to Santa Cristina Gela, by the Lake of Piana degli Albanesi. After a stroll and a cassatella (fried cannolo – a local delicacy) you will start your walk towards Corleone.

You climb along the antica trazzera (old route) towards the Santuario Maria S.S. del Rosario di Tagliavia. According to legend, in 1800, two shepherds found a rock with the sacred image of the Holy Mary. In the same place, while digging, they later discovered a miraculous spring of water that is said to have healed King Ferdinando I of Bourbon. The Sanctuary, erected in 1841, is a must-stop along the pilgrimage route.

The path finally leads you to Corleone, a town renowned as the birthplace of several Mafia families; it was immortalized by Mario Puzo’s “The Godfather”. While here, it is a must to visit the CIDMA: Mafia and Anti-Mafia Movement Museum.

As you leave Corleone, don’t miss the waterfall delle due rocche, about 10 mins out of town. From there, your walking path takes you through vineyards and open fields, passing masserie (country farms) where you may be lucky enough to be offered a taste of some freshly made ricotta! Eventually, you reach the lake of Prizzi, from where a steady climb takes you into town. Treat yourself to a cannolo with pistachio and candied orange!

A large part of today’s walk is within the tranquil woodlands of the Carcaci Natural reserve, home to numerous species of birds of prey. Leaving the forest, you will encounter the ruins of the abandoned village of Carcaci, with its cosy rural houses and small stone church. The last section takes you past some typical straw huts to the old town of Castronovo, from where a short pre-arranged transfer will take you your hotel in Cammarata (20 mins).

*You can also shorten today’s walk by 5 km with a transfer in the morning, by request.

Before starting out on your walk, be sure to stop for some local delicacies at the central Bar Sicilia. Fully energised, you are then ready to commence your hike; first along the railway, then gradually uphill to Acquaviva Platani. The last part of the path to Sutera – a little gem on the other side of the rock face you see in front of you – is along a stunning ridge. Get lost in the maze of alleys and chalk houses of the Arabic neighbourhood, called Rabato and visit the rich ethnographical museum.

First descending to the bed of the Platani river, you ford it and climb on the other side to Milena. Here the path climbs into the hills that surround the village and gives you a panoramic overview of the nearby valleys.

Racalmuto is the hometown of the famous Sicilian writer Leonardo Sciascia.

On the last stage of your walk you pass through several nice villages such as Grotte and Comitini, where life slowly follows the rhythm of the seasons. A “must do” is to taste the local arancini (fried rice balls filled with ragù, spinach or ham). When you reach Aragona, you take the train to Agrigento where you can enjoy a free afternoon to explore the old town or the Valley of the Temples.

Your trip comes to an end this morning after breakfast, unless you have booked extra nights with us. Consult the ‘Location’ tab for info about onward travel.

Getting there and away 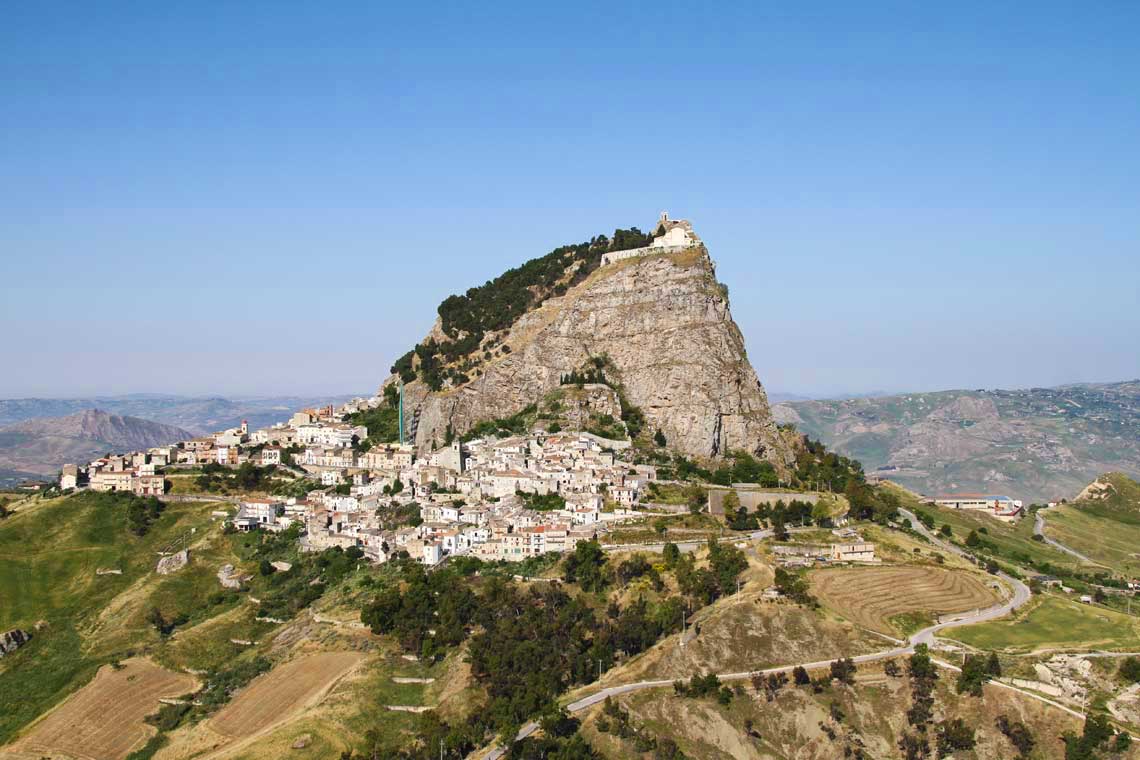