Walk the ‘Heel of Italy’ from Otranto to Gagliono del Capo

Explore the fortress and narrow streets of Otranto

The Cipolliane path; a breath-taking coastal trail named after the many caves along the way

Lecce: known as the “Florence of the South” with its Baroque palaces and churches

Hiking in Puglia: Self-guided walking holiday in the ‘Heel of Italy’

Puglia’s coastal trail, from Otranto to Gagliano del Capo, is a perfect synthesis of all the wonders this region has to offer; epic views, amazing swimming spots, undiscovered villages waiting to be explored and windswept, undisturbed landscapes.

After an enchanting circular walk among orange and olive trees, you leave Otranto to follow a red-earth coloured trail just metres from the sea, leading towards the lighthouse of Punta Palascia (the easternmost point of Italy) and on to the tiny cove of Porto Badisco. During this 8-day self-guided walk, you will pass tiny fisherman’s hamlets, coastal SPA towns and ancient Messapian village.  Your trip ends in Lecce, with its wealth of baroque palaces and Roman masterpieces.

This walk is a real feast for the senses, and the presence of nature is more and more vivid with each step; accompanying you with the rustle of ancient olive trees, the screeching of crickets, the smell of wild fennel and liquorice and the azure twinkle of the sea.

On this journey you walk 70.6 km over 6 days (an average of 11.7 km per day). The walks mostly follow rocky coastal footpaths, sometimes through low vegetation/bushes, mule tracks and footpaths and a few sections of secondary surfaced roads as you enter the villages/towns. Though the distances and elevation are not particularly demanding, we have graded the route as easy-moderate because the terrain is rocky and the trail not always obviously visible.

Arrive in this lovely seaside town on the shores of the Adriatic. Get settled in your accommodation, and then step outside and breathe in the incredibly fresh, crisp sea air. On a clear day it is possible to see over the Strait of Otranto to Albania. In the afternoon you can wander among the atmospheric alleys in the historic centre.

Today’s walk is a lovely warm-up hike for the week ahead. This short loop takes you through the Idro river valley, through a landscape rich with orchards, olive trees, oranges and a variety of vegetables.

You follow the river upstream before cutting into the olive groves and passing the impressive Church of Sant Angelo. You then cross the river and follow it back into Otranto, known as the “Pearl of the Orient”, due to its easterly location.

First navigate your way through the old town’s maze of narrow alleys to reach the new port. From here a flat, gravel coastal path winds its way around a series of coves. You will pass several WWII bunkers and you have the option of making a short detour inland to an interesting “bauxite lake”; its emerald waters contrasting dramatically with the surrounding red earth.

Following the coastline once more, you continue towards the clearly visible Punta Palascia Lighthouse. At some points the knee-high Mediterranean vegetation becomes thick and you need to find your way, but as long as you have the lighthouse in front and the sea on your left you are on the right track! On clear days you can see the Albanian mountains across the Adriatic Sea. Punta Palascìa lighthouse is the easternmost point of Italy and 71km away from Albania.

The first stop of today’s walk is the beautiful inlet of Porto Badisco, which is an ideal place to stop for a coffee and some provisions for your lunch picnic. Follow a shepherd’s path along the coast, looking out for the typical pagliari; round, flat topped, dry stone buildings where the shepherds used to sleep. After 6 km you leave the coast, climbing up to the inland plateau. Here you follow narrow paths through the fields. At 8,5 km there is a good picnic spot in a little pine tree forest that offers great shade on sunny days. The last section is on a surfaced road, descending to the Spa town of Santa Cesarea Terme; a gem of a town with an ornate palace and some fantastic swimming spots to cool down after your walk.

Leave Santa Cesarea, climbing uphill on the surfaced road until you reach an old stone-walled path of gravel/grass. Follow narrow paths through the fields to the Ancient Messapian town of Castro, with its imposing high walls. Spend some time exploring the old town and maybe having lunch before descending to the old port. Continue along the coast on an uneven, rocky trail to the Acquaviva cove; a beautiful hidden inlet and freshwater spring which is an ideal spot for a refreshing swim. The last part of the path climbs up the thickly forested Acquaviva valley towards Marittima village.

Your path from Marittima takes you initially through orchards of immense olive trees. You then follow the first of several tratturi, a system of ancient roads and footpaths traditionally used by the locals to go down to the sea or to connect villages and orchards. Each stone tells the story of a hard peasant life. Descending to Tricase Porto, you can stop for an excellent caffè in ghiaccio (iced coffee) and go for a refreshing dip before continuing to today’s final destination; the small coastal hamlet of Marina Serra, with more great swimming spots.

The last day’s walk starts with a short uphill trail known locally as Sentiero del Nemico, or “the enemy’s path”; so-called because it was apparently the ideal place to ambush unexpected visitors in the old times!

A short asphalt section on the costal road leads you back to the ancient tratturi, leading you inland before emerging to the coast once more at the rocky beach of Novaglie. Here begins the breath-taking Cipolliane path, named after the caves you can visit along the way. This leads you to the final great swimming spot on your trip at the Ciolo bridge. From the tiny Ciolo cove, you walk up the valley to Gagliano del Capo, where you take the train to Lecce for your last night in the beautiful Baroque city.

Your hiking holiday in Puglia comes to an end this morning after breakfast. Depart for the airport with public transport, unless you have pre-booked a private transfer with us. If you haven’t been to Puglia before we would highly recommend extending your holiday to visit some of the other fascinating cities in the region, such as Albertobello and Matera.

Getting there and away 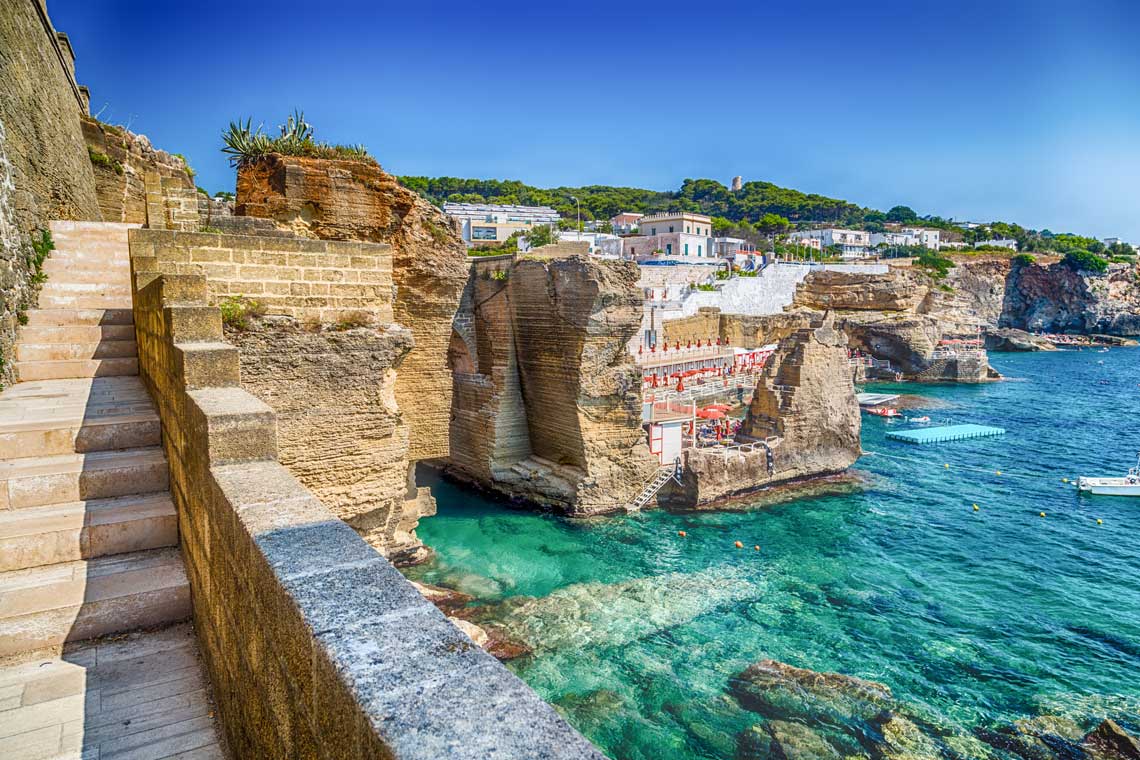