Walk through Danish history in the footsteps of kings, soldiers, traders and pilgrims

Feel the presence of history in Viborg and Jelling, which are two Denmark’s oldest towns.

Experience the beautiful landscapes around Lake Hald and the Hills of Dollerup.

Enjoy the rich flora and fauna at Lake Bølling, where the mummified corpse of Tollund Man was found.

Wander among the beautiful inland dunes of Sepstrup and Vrads Sande, covered in purple heather.

Pass the sources of Denmark’s two greatest rivers, flowing in opposite directions.

Walk ‘The Ancient Road’ from Viborg to Jelling

Jutland’s Hærvejen trail is the most famous and well-described hiking route in Denmark. Established in the Middle Ages, it was the most important route through Jutland for the transport of animals and goods, as well as for pilgrims, armies, and kings. It remained so until the appearance of the railways.

The trail runs along the watershed of the Jutland Peninsula, known as the ‘Jyske Højderyg’ (Jutland Ridge) all the way from the historic town of Viborg to Hamburg in Germany. By using this route, one could avoid rivers, or ford them close to their origins where they were still shallow. As time went by this route was improved with paved fords, embankments and bridges.

Hærvejen was designated as a European Cultural Route in 2010 and the tourist offices in the surrounding towns have together established a dedicated website with a detailed description of the route, as well as sites of interest along the way: www.haervej.com.

On this stage from Viborg to Jelling you get up close with both nature and history, as you walk between two of Denmark’s most historic towns. You start in Jutland’s ancient capital Viborg, with its famous cathedral and medieval streets. Then you set out on a hike through a beautiful and varied landscape far away from the world’s hustle and bustle. The route brings you through rolling hills with ancient oak thickets, inland sand dunes and moorland plantations, past the sources of two of Denmark’s greatest rivers; Gudenåen and Skjern Å, as well as numerous lakes, holy springs and historical sites. Your final destination is Jelling; one of the most important historical towns in Denmark. Here you find the famous Jelling stones, dating from the 10th century, with runic inscriptions proclaiming the conversion of the Danes to Christianity by the famous king Harald Bluetooth.

Your hiking holiday along Hærvejen starts in Viborg, where you stay in a B&B in the town centre. Viborg is an old episcopal residence and was Jutland’s most important and powerful city during the Middle Ages, which the impressive twin-towered cathedral bears witness to. Take time to explore the old town centre with the lovely cobbled street Sct. Mogens Gade, where you will find several houses dating from the Middle Ages. You can also visit Sortebrødre Church, which is the only building remaining from the old Dominican abbey, or Søndermarks Church where you will find a 10 m long tapestry embroidered with scenes from your upcoming hiking route Hærvejen.

Day 2: From Viborg to Dollerup

Leaving Viborg, you follow Hærvejen south into Liseborg Forest. For the next 8 km you will be walking along quiet forest paths through Viborg Hedeplantage, Viborg Krat and Langskov, before reaching the old inn Niels Bugges Kro, situated on the banks of Lake Hald (in Danish Hald Sø). You continue about 3 km along the lake and reach the beautiful heather-clad hills of Dollerup Bakker. Most of the area around Hald Sø and Dollerup Bakker is protected as an area of outstanding natural beauty. As you make your way along the ridge, you will enjoy wonderful views over the lake down below.

Day 3: From Dollerup to Thorning

From Dollerup you continue your hike through the little village of Skelhøje and along quiet forest tracks through Stendal and Havredal Plantage where you will see many protected burial mounds and old holloway tracks. You then walk through Ulvedal Plantage where the outlaw Jens Langkniv (Langkniv means ‘long knife’) lived in the end of the 16th century and have had a 5,500-year-old long burial tomb named after him. It was also in this area that the famous Danish writer Steen Steensen Blicher lived and walked around picking up stories from the local farmers.

After Ulvedal Plantage, you will take a detour of almost two kilometres away from Hærvejen to the village of Thorning, where you can visit Blicher’s former rectory, which now houses a museum dedicated to him and the surrounding area. Your accommodation is located a further 2 km away along a quiet country road. You can either walk this or else your hosts will be happy to pick you up from the village.

Day 4: From Thorning to Lake Bølling

After breakfast you can either walk or get a lift from your hosts back to Thorning. From here, you continue south through the village of Nørre Knudstrup, and after about 3 km you are reunited with Hærvejen. Shortly after, you pass the Haller Å stream, where the deep tracks from old carts are still visible leading down to the ford. Here you will also find King Knap’s Dike, which is a 200 m long rampart from the Iron Age. It is also in this area that the Battle of Grathe Heath took place. Today, the heath is an idyllic spot, but on the 23rd of October 1157 it was a battle scene where a bloody civil war led by the kings Svend Grathe and Valdemar the Great came to an end. Valdemar emerged triumphant and Svend was executed at the stroke of an axe.

Continue through Kompedal Plantage, where conscientious objectors were once condemned to forest work. South of here, in Stenholt Forest, you leave Hærvejen to follow a nature trail to your B&B in Engesvang village.

Today’s route starts out beautifully along the northeastern shore of the 360-acre lake Bølling Sø, formed during the ice age about 10,000 years ago. The lake is famous because of the discovery here of the naturally mummified corpse of Tollund Man (displayed at Silkeborg Museum), who lived during the 4th century BC. After about 6 km you turn away from the lake through woodland and fields, before you cross under the bridge Funder Ådalsbro, which leads the motorway over Funder Valley. Denmark’s longest land bridge is an impressive sight from below!

You now find yourself in Funder Ådal surrounded by Hørbylunde Krat, which is an undulating area of heather-covered hills and ancient oak thickets – and probably the closest you get to a Danish mountain landscape. The old sunken laneways indicate that the ford has been a historically important crossing.

The end of the route takes you through the woodland Bødskov Krat and after a few paddocks you reach the tiny village of Sepstrup, where you will be picked up and transferred to your accommodation in a nearby inn.

Day 6: From Sepstrup to Nørre Snede

Today begins with a short transfer back to Sepstrup. From here, you continue your walk through the distinctive and very beautiful Sepstrup Sande and then Vrads Sande. Both areas are inland dunes; a result of natural as well as human-influenced sand drifts over thousands of years. Covered in heather, crowberry and juniper, the two inland dunes lie between large heath plantations and long rows of pine trees dating from the end of the 19th century. In many places you can see old wheel tracks from centuries of passage, as well as burial mounds from the Stone and Bronze Age.

After the two areas of inland dunes, you walk through the forests of Grane Plantage and then Tingdalskoven between Torup Lake and the Tingdal Lakes. The last few kilometres take you through Palsgård Forest, one of the oldest plantations in Jutland, and part of Boestmose moor. Shortly after, you will reach your accommodation outside the town of Nørre Snede.

Day 7: From Nørre Snede to Kollemorten

After about 4 km of today’s route, you reach Nørre Snede, situated at the top of the Jutlandic ridge that splits Jutland into an eastern and western part. Afterwards, you walk through Nedergård Forest and then along the beautiful Groest Heath towards Rørbæk Lake. During WWII, the British Army dropped weapons here for the Danish resistance movement.

Then follows one of the most originial stretches of Hærvejen along a gravel road, which is protected from asphalting. The stretch exudes history, with ancient burial mounds in fields and old wheel tracks along the gravel road. Surrounding you is Denmark’s biggest oak thicket, and via a small detour you can visit the trickling springs from which the country’s two biggest rivers – Gudenåen and Skjern Å – rise and flow in opposite directions.

About 2 km before the village of Kollemorten, you pass the church Øster Nykirke, which is the highest standing church in Denmark (127 m). It was built between 1150-1200 as a shrine to Saint Peder’s spring (just east of the church), which has attracted pilgrims for centuries due to its healing powers.

The stage ends in Kollemorten where you will be picked up and driven to your accommodation in a nearby B&B.

Day 8: From Kollemorten to Jelling

After breakfast you get a lift back to Kollemorten.

Although today’s stage is probably the least scenically spectacular on the trip, it will give you a good insight into rural Jutland and you can also look forward to exciting historical exploration in the Viking town of Jelling. For most of the stage, Hærvejen goes through an open agricultural landscape of fields, farms, tractors and scattered woodland. Close to Givskud village, you will pass Knudshøje, a collection of protected burial mounds from the Early Bronze Age. Shortly after, you pass the old inn Harresø Kro, which dates to 1609, making it one of the oldest preserved inns along Hærvejen.

Your route ends in the kings’ town of Jelling; one of the most important towns of the Viking Age. The Jelling Monuments (a collective term for the church of Jelling, the Jelling stones and the two giant burial mounds), are considered Europe’s finest Viking Age monuments, and since 1994 they have enjoyed UNESCO World Heritage patronage. You should also check out the excellent visitor centre ‘Kongernes Jelling’.

If you wish to shorten the stage to have more time in Jelling, you can ask your hosts to drop you a bit further along the route.

Your hike along Hærvejen from Viborg to Jelling has come to an end. Consider staying for an extra night in Jelling so you have plenty of time to explore the many interesting historical monuments. 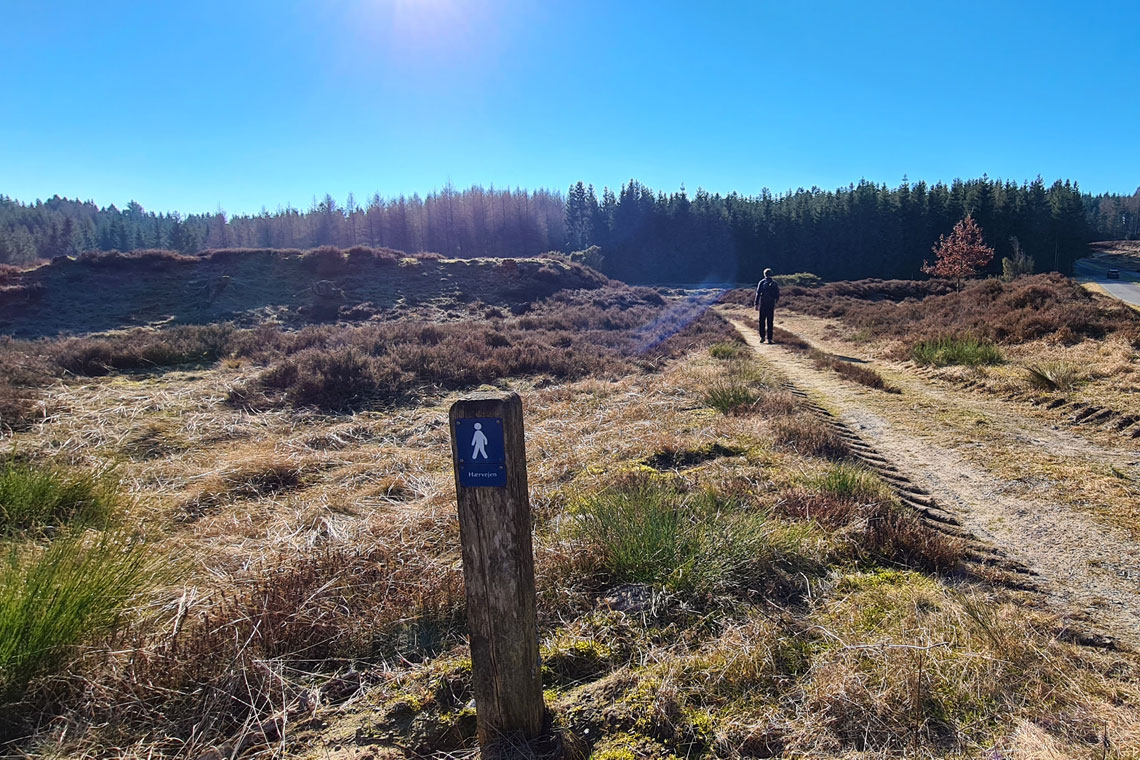