The classic Portuguese Way from Porto to Santiago de Compostela

Discover some of Portugal’s most important historic sites

Crossing the Minho river from Portugal to Spain

The satisfaction of receiving your Compostela in Santiago

Why choose the Portuguese Way?

The Portuguese Way is the second most popular Camino route and is a great alternative to the Camino Francés for pilgrims looking for something a little different. The route is relatively flat, in comparison to the French Way. It passes through lush forests, vineyards and historic villages along centuries-old paths, and crosses numerous important rivers by way of medieval bridges. Chapels, churches and convents are your constant travel companions on this adventure. The signposting of the route is excellent, especially in the Galician section, and the route is far less crowded than the French Way.

Two different routes
The Portuguese Way can be walked all the way from Lisbon (610 km), but the most popular starting point is Portugal’s second largest city, Porto (230 km). From Porto, there are two alternative routes to choose from; an inland route (the Central Way) and the Coastal Way (Caminho da Costa). The latter reaches Galicia through A Guarda, passes through Baiona and Vigo before connects in Redondela with the central route that enters Galicia through Tui. It passes through O Porriño, Redondela, Pontevedra, Caldas de Reis and Padrón before reaching Santiago.

Make sure to arrive in plenty of time to explore the UNESCO World Heritage City of Porto.

Starting from the centre of Porto, the first half of this walk takes you gradually out of the city suburbs into the Portuguese countryside. Pay careful attention to your route notes as you follow the maze out of Porto. The route is much more rural from Maia onwards; taking you through tranquil countryside with numerous churches along the way.

It is possible to shorten today’s walk by 11 km and skip the suburban stretch by taking the metro to Maia and starting your walk from there.

You will walk along some lovely woodland paths on your way to San Pedro de Rates, where you will encounter the Roman church Igreja de São Pedro de Rates. Located next to the Ave river, this is one of the most important Benedictine monasteries in all of Portugal.

This stage takes you through rolling hills, eucalyptus and pine woods to the charming market village of Barcelos. You will pass through numerous villages, including Pontegãos, Vila Chã, Porto Carreiro, Santa Cruz, Mercedes, and finally through Barcelinhos, before crossing the medieval bridge into Barcelos itself, famed for its ancient and still-thriving pottery tradition.

Leaving Barcelos, your day begins with a steady climb to Portela and Albergaría, the hardest part of today’s stage. From there, you follow the yellow arrows that lead you along the Camino, past the churches of Vila Boas and Aborim and finally over the 12th century Ponte das Tábuas bridge into Balugães.

Less villages along the way today, but the scenery more than makes up for it as you wall along rolling green hills and through the tranquil Lima valley to Ponte da Lima; one of Portugal’s oldest and most charming towns situated on the country’s finest medieval bridge.

Regarded as the most difficult stage of the Portuguese Camino, today you will walk next to the Labruja river and through lovely meadows and woodlands. Beginning with a long, steady climb to Alto da Portela Grande (410m), from where you will enjoy splendid views of the surrounding countryside before descending through pine forest and past the church of São Paio in Aqualonga to the rural village of Rubiães.

Today’s route takes you from Portugal to Spain, as you cross the River Minho over the International Bridge to reach Tui, in Galicia. Tui is a well-preserved medieval town with an impressive Romanesque cathedral. You will mainly walk along quiet country roads and woodland paths.

Your first stage in Galicia is a relatively short and easy stage along quiet country roads and woodland paths through the Louro river valley to O Porriño.

A similar stage to yesterday, but with a short, steep climb between Mos and Santiaguiño, from where you will be rewarded with views of the bay in the distance before continuing downhill. Follow the yellow arrows through various small villages to Redondela. Once you get to Redondela you will see San Simón Island and two huge train bridges. In 2015 the town council erected a bench at the highest point of the town to sit and enjoy the wonderful views over the estuary.

A relatively flat stage today, continuing along the estuary before entering some pine forest, then crossing the Verdugo river via Ponte Sampaio; a famous bridge where Napoleon’s army once suffered a heavy defeat. Continue by climbing the ancient stone paths to the 13th century Church of Santa Maria with its wonderful views over the Bay of Vigo before arriving in Pontevedra. This small riverside city has an impressive heritage; it was once Galicia’s biggest and most important port and it was here that Columbus’ flagship, the Santa María, was built.

Gentle paths take you through chestnut groves, pine and eucalyptus woods and along river valleys today. You will pass through lots of typical Galician villages, such as the hamlet of Tivo with its lovely fountain. As you reach Lombo da Maceira, look out for a statue of Saint James with his walking stick, showing pilgrims the way. The Romanesque Church of Santa María welcomes you at the entrance to Caldas de Reis, a spa town where you can rest your weary feet in the hot springs on arrival.

Today you will leave Pontevedra province to enter the province of A Coruña – Santiago is getting very close!

This is an easy and very pleasant day of walking through pine forests in two river valleys. Padrón is believed to be place where St. James first preached in Spain, as well as being the arrival point where his body was brought to following his martyrdom in Jerusalem, before it was carried onwards by the disciples to Santiago.

Tasting the world-famous Pimientos de Padrón (Padrón peppers) is a must!

The final stage of your journey. As you approach Santiago you will pass through the same villages as the disciples did when carried St. James’ mortal remains to lay them to rest for eternity. There is inevitably some road walking as you approach the city, but you will also walk through some pleasant sections of forest before spotting the spires of the magnificent cathedral of Santiago de Compostela. You can feel the centuries of history as you walk the cobbled streets of its UNESCO-listed old town and enjoy the sense of achievement in completing your journey!

Your arrangement ends after breakfast this morning, unless you have booked additional nights.

Getting from Santiago de Compostela 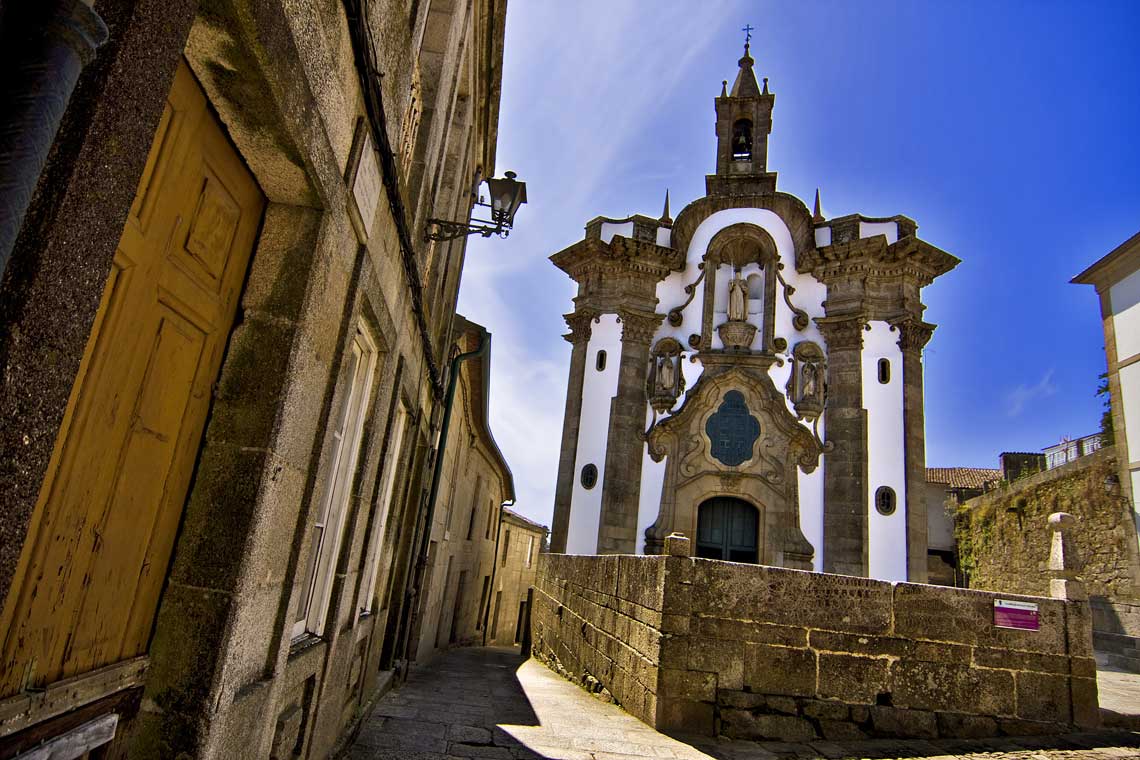